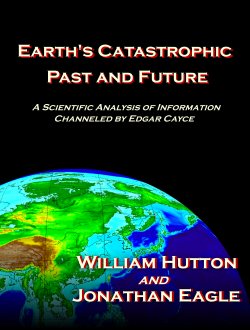 Edgar Cayce, Americaï¿½s best documented psychic, gave upwards of 44 "readings" that dealt with lost continents, geophysical changes to Earth beginning 1958-1998, and a pole shift due to begin about now. In this book, geologist William Hutton and researcher Jonathan Eagle look for correspondences between results of geophysical research studies and psychic descriptions of prehistoric catastrophes. They also scientifically test the readingsï¿½ predictions of catastrophic Earth changes, while investigating the following fascinating subjects:

From the Foreword by the Editor: ï¿½The acid test of pole shift and other Earth change predictions is their scientific credibility. If true, momentous societal and political changes are imminent. The geopolitical map of the world will be redrawn. The authors are exploring the transition from the end of one Age to the beginning of another.ï¿½

"Earth's Catastrophic Past and Future" can be purchased online through the Hutton Commentaries website, by clicking on the book title link. Follow the instructions given for purchasing.  Those interested in obtaining an autographed copy can do so through our web page. Indicate which author(s) you would like to have sign the title page, and how you would like your name to appear.   While it is true that autographed books are more valuable, we are not pushing anyone to obtain an autographed copy of the book.